I recently finished the book The Lovely Bones by Alice Sebold and as part of my 101 Things in 1001 Days Challenge, I promised to review every single book I read over the next two years! It’s a hefty goal, especially if you read a lot, but luckily I average one or two books a month.

Exploring the grieving process of the family and friends of a 14-year-old girl who had been raped and murdered, The Lovely Bones is a sad but good read. Continue reading to find out more about the book as well as my thoughts and rating.

Related: Top 20 Books to Get Excited About This Year!

Disclosure: Some of the links in this post may be affiliate links, meaning, at no extra cost to you, I will earn a small commission for any purchases made through these links. For more information see the disclosure policy. 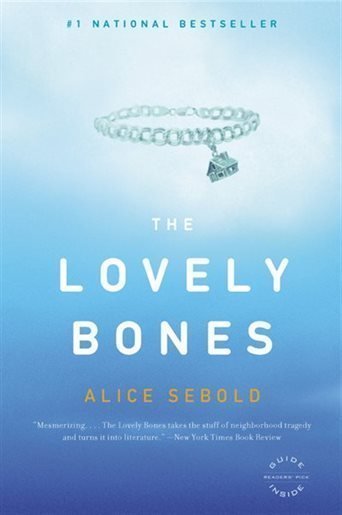 The Lovely Bones by Alice Sebold

“The Lovely Bones is the story of a family devastated by a gruesome murder — a murder recounted by the teenage victim. Upsetting, you say? Remarkably, first-time novelist Alice Sebold takes this difficult material and delivers a compelling and accomplished exploration of a fractured family’s need for peace and closure.

The details of the crime are laid out in the first few pages: from her vantage point in heaven, Susie Salmon describes how she was confronted by the murderer one December afternoon on her way home from school. Lured into an underground hiding place, she was raped and killed. But what the reader knows, her family does not. Anxiously, we keep vigil with Susie, aching for her grieving family, desperate for the killer to be found and punished.

Sebold creates a heaven that’s calm and comforting, a place whose residents can have whatever they enjoyed when they were alive — and then some. But Susie isn’t ready to release her hold on life just yet, and she intensely watches her family and friends as they struggle to cope with a reality in which she is no longer a part.” 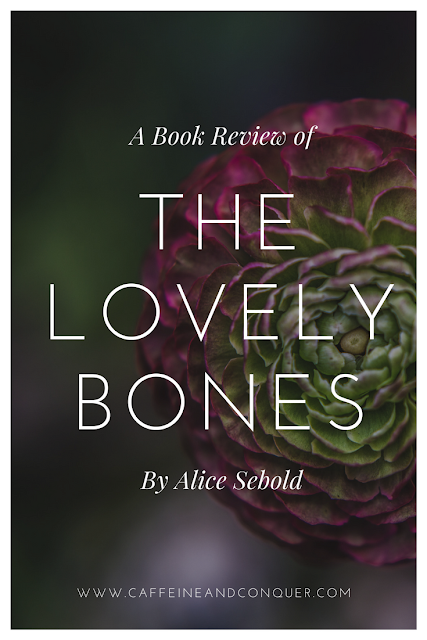 My Thoughts on The Lovely Bones

As a book that many people had already read, I had surprisingly heard nothing of the storyline. I also had no idea there was a movie based on the book. So when I read it I was reading it with fresh eyes.

Immediately the book’s opening sets the tone for the entire book:

“My name was Salmon, like the fish; first name, Susie. I was fourteen when I was murdered on December 6, 1973“

I knew right away that this book was going to be a little bit depressing. The fact that it was a murdered teenage girl who narrated the story, rather than an adult, made it even worse.

Susie Salmon was lured into a bunker type hole a man in her neighborhood had dug where she was raped and murdered. Mr. Harvey, the murderer, we learn had done this many times before in various cities of the United States. It becomes infuriating to learn that he has gotten away with murdering children until now and even more aggravating when he continues to evade the suspicion of police and residents during Susie Salmon’s investigation. The only person who knew was her father, completely based off his gut feeling, so you end up rooting for and feeling completely empathetic to Mr. Salmon throughout the entire book.

We are witness to various ways people cope with grief by observing Susie’s family and friends. Her sister tries to harden herself, her mother seeks solace by escaping first into an affair and later abandoning her family. Her father becomes obsessive over solving her murder and her friends remember her, Ruth especially who has a sixth sense.

As a non-religious person I had a harder time relating to the idea of Susie’s heaven, however, I could imagine how frustrating it must be to watch your family grieve and not be able to help them get closure. The best parts of the book, in my opinion, were the small instances where Susie was actually able to reach out to earth in small ways, such as the broken glass when her father smashed his miniature book collection, showing up in the hospital in the periphery of the room after her father’s heart attack and later when she was actually able to enter Ruth’s body and interact with her friend.

As I research this novel I realize the story of The Lovely Bones has been shaped by the author’s own personal experiences living in the suburbs, witnessing an incident in which someone was hit by a vehicle and died on her own front yard, and her own personal experience with rape which she shares in her memoir Lucky.

I gave The Lovely Bones by Alice Sebold a 4 out of 5 stars on Goodreads solely because I do not relate to the whole idea of heaven. I enjoyed her writing, had not read a story like this before (except maybe The Book Thief which is narrated by Death). The narrative of being raped, murdered and being an observer from heaven as your family grieves sounds utterly horrifying.

Overall, Alice Sebold’s writing was successful in putting me in the shoes of a murdered teenager in heaven and the grieving family. Her writing style was easy to follow and I would recommend The Lovely Bones to readers who enjoy suspense, mystery and psychological storylines.

What are your thoughts on the book? Did you enjoy it? Hate it? Let me know in the comments below!